Since picking up my first hook I’ve been trying to figure out how to crochet a hat in the round. And while never successful, the desire to do it just wouldn’t leave. Something “clicked” in my mind a couple weeks ago when I picked the hook back up. It all started making sense, while prior to that, I was essentially just “winging it”. So I felt confident in trying a hat again.

I hopped over to the trusty YouTube and searched for a beginner friendly pattern. I landed on Melanie Ham’s channel. I’ll post the video that I used below, and link to her site, where you can find the written pattern. Melanie’s tutorial, one that I had tried before, finally made sense to me! And before I knew it, I had learned the magic circle, and how to crochet a hat in the round.

I’m floored to say, but I actually finished a hat today! Now, while I won’t use the same yarn again, as I prefer a chunkier look and feel, I am so happy to actually tried it and was, finally, successful! I now want to crochet some hats for my kids for the winter. We don’t get a lot of winter here in north Texas, but we get enough to warrant a hat or two. Next up, I hope to learn how to crochet a pair of mittens.

Here is the exact tutorial I used to create the hat.

And here is the link to visit Melanie Ham’s website to get the written pattern.

Thanks so much, Melanie, for such a great tutorial, and for continuing to put out free tutorials on YouTube! 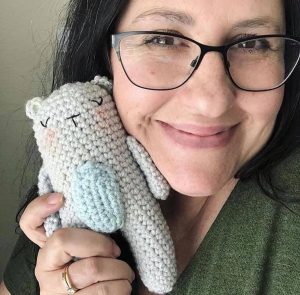 My name is Nell and I’m a wife and mother first and a die harder crafter second. Welcome to my space online where I share my crochet projects and stories of my sweet family.

This blog uses affiliate links. This means that sometimes we promote products, services, or people that we believe in, and in exchange, will receive a small commission if you purchase through our link.

14 to 42 in a blink. Grateful for another year and

I mean seriously could we be any more related? Pra

I’m in a bird kick. And learning with each bird.

Family updates: We voted today. We then went to

Quality time with my guys.

This guy is turning 14 on Saturday! Hard to believ

Some of my most favorite embroideries over the pas